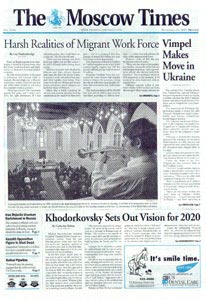 Igor Tabakov / MT A picture of Medvedev and Putin hanging on the wall of the office of a director at the All-Russia Exhibition Center. The Politics of Double Exposure.

By Francesca Mereu / Staff Writer While it remains unclear whether Dmitry Medvedev or Vladimir Putin is more powerful, many government officials have reached a compromise — at least on what to hang on their walls.

The portraits of Putin that dominated government offices during the eight years of his presidency are giving way to photographs of Prime Minister Putin and President Medvedev together.

In the White House, where Putin has his office, many bureaucrats have hung the photos on their walls, a White House official said.

"Officials are mainly hanging the picture of them together in their offices. There is no rule forcing you to do that. It is their choice," said the official, who spoke on condition of anonymity because he was not authorized to talk with the media.

Former Prime Ministers Mikhail Fradkov and Viktor Zubkov were denied such an honor, the official said. "I never saw their portraits anywhere. People only had President Putin's portrait at the time," the official said.

But pictures of the two leaders together are popular, if the hundreds that have popped up at stores around Moscow are any indication. Dual portraits of Putin and Medvedev are sold in all the big bookstores, while clocks and matryoshkas featuring the stern power couple can be found in kiosks and any stall selling souvenirs.

In the 17 years since the Soviet collapse, Russia has never had a powerful prime minister. Putin is an exception, and his dominance is confusing the country's bureaucracy, which is used to having "a point of reference," said Yury Korgunyuk, a political analyst with the Indem think tank.

"This is why they keep the portrait of both of them in their offices. They don't want to offend either of them, even from a visual point of view," Korgunyuk said.

"But our bureaucrats are really flexible: They can change their mind within few seconds. If they see that Putin is not powerful anymore, they will cut his portrait off the picture and throw it away," he said.

Since Medvedev was inaugurated as president on May 7, Viktor Deryugin, an artist who has been painting portrait of politicians since 1990, has sold about 100 copies of a framed portrait of Putin and Medvedev against the Kremlin or the Russian flag, as well as 100 diptyches of the two. Most of the buyers want to place the pictures in their offices, he said.

"Everyone has already bought their share over the past eight years," Deryugin said.

The Tvoi Portret company is offering a 10 percent discount on oil paintings of the leaders together or Medvedev alone until the end of this month. No Putin portraits are on sale.

"Such a picture emphasizes your status and strengthens your position," it says on its web site. Tvoi Portret development manager Alexander Vladimirov said companies were the main clients. "Ordinary people do not hang these portraits in their homes," he said.

Not everyone is hanging the portraits in their offices.

"We haven't reached such a level yet," said Sergei Mitrokhin, a Moscow City Duma deputy with the opposition Yabloko party.

"I think he was a professional, and I respect him," said Gudkov, a member of A Just Russia and former KGB official.

He said he was given Putin's portrait years ago but kept it "somewhere at home."

Russia's youngest State Duma deputy, Robert Shlegel, 23, said he has pictures of friends in his office. "I haven't thought about hanging a portrait of the president and the prime minister. It is a tradition, but maybe I'll hang a Russian flag," said Shlegel, a member of United Russia, the party headed by Putin.

A City Hall official said only new bureaucrats intent on climbing the government ladder placed portraits of Putin and Medvedev in their offices. "The veterans don't care about this show of loyalty to the powers that be. They know that they are not losing their jobs," the official said.

He added: "We have [Moscow Mayor Yury] Luzhkov's portrait. This is enough."

When a reporter at Putin's last Kremlin news conference in February asked him whether he would put Medvedev's portrait on his wall, Putin replied dryly that he did not need to make such a display of loyalty.

"I don't need to bow to his portrait — there are other ways of building a relationship," Putin said.

And he seems to have kept his promise. "Putin does not have any portraits in his office," Putin's spokesman Dmitry Peskov said Thursday.